Women need more information on the potential risks and benefits of taking tamoxifen, raloxifene, and aromatase inhibitors for breast cancer risk reduction. There is no current evidence that these drugs ‘prevent’ breast cancer; some studies suggest that they may reduce the chance that a woman will get breast cancer during a certain period of time. NBCC urges physicians to prescribe chemoprevention drugs cautiously and responsibly.

All women are at risk for breast cancer, and there are very few actions a woman can take to reduce her risk of breast cancer. Chemoprevention — giving drugs to women who do not have breast cancer — is just one approach to risk reduction that scientists are currently researching. To date, there is no evidence that these drugs ‘prevent’ breast cancer, although some studies suggest that they may reduce the chance that a woman will get breast cancer during a certain period of time. As with most drugs, chemoprevention drugs have adverse side effects, and it is important that their benefits outweigh their risks.

Most scientists agree that chemoprevention drugs should not be given to every woman in the population because the majority of these women will not get breast cancer. Thus, as depicted in the trials described below, scientists have attempted to define a population of women who are most likely to gain some benefit from these drugs — women who are at ‘high risk’ for breast cancer. High risk is defined by researchers at the National Cancer Institute (NCI) and the National Surgical Adjuvant Breast and Bowel Project (NSABP) as a 1.66% or greater chance of getting breast cancer within the next 5 years, which is the risk of an average 60-year-old woman. However, this is an arbitrary cut off point, and the use of this threshold to define ‘high risk’ is controversial. Most of these women will never get breast cancer; highlighting the importance of a risk/benefit analysis.

The Research So Far

Until recently, in this country, clinical trials of breast cancer chemoprevention have focused primarily on two drugs – raloxifene and tamoxifen – that are selective estrogen receptor modulators (SERMs). A SERM is a drug that blocks estrogen from initiating cell division in specific tissues of the body, including breast tissue and certain types of breast cancer. SERMs also mimic estrogen and stimulate other tissues of the body, such as the endometrium (uterus).

In addition to reducing the risk of tumor recurrence in breast cancer patients, tamoxifen also reduces a patient’s chance of developing breast cancer in the opposite (contralateral) breast. This finding led researchers to hypothesize that the drug may be able to prevent breast cancer in healthy women at increased risk of developing the disease. In 1992, the NCI and NSABP began enrolling participants in a clinical trial, the Breast Cancer Prevention Trial (BCPT), to examine the hypothesis. This trial was also designed to look at whether taking tamoxifen would reduce the incidence of ischemic heart disease and bone fractures.

Based on the results of the BCPT trial published in 1998,1,2 tamoxifen was approved by the Food and Drug Administration (FDA) for reduction of breast cancer risk in women at high risk for the disease. In the study, tamoxifen reduced the 5-year risk of ER- positive breast cancer in a population of high-risk pre and postmenopausal women.

The BCPT study followed 13,388 high-risk women – 6,707 women were assigned to a placebo arm (control group) and 6,681 women were assigned to the tamoxifen arm. The study was double-blinded, which means that neither the researchers nor the patients knew who was assigned to each treatment. Women were considered to be at high risk for breast cancer if they were 1) 60 years old or older, 2) between the ages of 35 and 59 years old with an elevated 5-year predicted risk of cancer (at least 1.66%), or 3) had a history of lobular carcinoma in situ (LCIS). About three quarters of the trial participants had a 5-year predicted breast cancer risk greater than 2.00%. The large majority of participants (97%) in the BCPT were white women.

The 7-year incidence of invasive breast cancer was approximately 4.3% in the placebo group and 2.5% in the tamoxifen group.2 The results of the BCPT were reported in terms of relative risk — tamoxifen use resulted in a 42% reduction in the 7-year risk of invasive breast cancer. Although these results are substantial, they obscure the fact that the large majority of women in the study did not get breast cancer, regardless of whether they were given tamoxifen or not. Reported in terms of absolute risk, tamoxifen use ‘prevented’ clinically detectable breast cancer in only about 2% (4.3 – 2.5) of the women who took tamoxifen. Thus, many healthy women received a drug that benefited only a small percentage of the total study population. This will be the case with any breast cancer preventive drug that is given to a large population of healthy women.

The risk reduction in this trial resulted from a decreased risk of ER-positive breast cancer; there was no reduction in ER-negative breast cancer associated with tamoxifen use. The study also found that tamoxifen increased the risk of endometrial cancer, stroke, pulmonary embolism, and deep-vein thrombosis. In terms of benefits, tamoxifen led to a 32% reduction in hip, radius and spine fractures.

These results apply to high-risk women in the general population. Although this risk/benefit analysis provides some useful information, long-term incidence and mortality data must be obtained in order to properly weigh the risks and the benefits of tamoxifen. It is important to determine how many women die of breast cancer versus how many women die of the adverse effects associated with tamoxifen use. In addition, risk/benefit analysis is not an exact science –the calculation of risks and benefits in the study above were based on uncertain rates of disease in the population.

As part of the study design, the BCPT data were regularly reviewed by an independent Endpoint Review, Safety Monitoring, Advisory Committee (ERSMAC). At a regularly scheduled meeting of ERSMAC, the committee recommended to NSABP that the study be unblinded (treatment assignments revealed) because of the ‘clear evidence of a reduction of breast cancer in the tamoxifen group.’ In April, 1998, the study was unblinded less than six years after it was initiated; the average follow-up time for participants was about 4 years. At this point, participants in the placebo group were free to begin taking tamoxifen. When participants of the BCPT began to cross-over from one group to another, researchers were no longer able to isolate the effects of tamoxifen. Thus, the long-term effects of tamoxifen on breast cancer incidence and mortality could not be obtained from the study. Nonetheless, in October, 1998, the Food and Drug Administration approved tamoxifen for the reduction of incidence in breast cancer for high-risk women, but did not approve it for breast cancer prevention.

In 1999, researchers conducting a study looking at the SERM, raloxifen, for the prevention of osteoporosis, noticed that patients taking raloxifene had a lower risk of breast cancer than the control group.

This observation led to the Study of Tamoxifen and Raloxifene (STAR) trial, one of the largest breast cancer clinical trials ever conducted. 6 The STAR trial led to the 2007 FDA approval of raloxifene for reducing the risk of invasive breast cancer in postmenopausal women with osteoporosis and in postmenopausal women at high risk for invasive breast cancer. This trial, conducted by the NCI and NSABP, showed that raloxifene works as well as tamoxifen in reducing breast cancer risk for postmenopausal high-risk women without some of the serious side effects (uterine cancers, blood clots) known to occur with tamoxifen. The National Breast Cancer Coalition (NBCC) had serious reservations, which are detailed below, about aspects of the STAR trial’s design and conduct.

The STAR Trial Had Shortcomings

Due to the promising results of the previous clinical trials on tamoxifen and raloxifene,1,2,5 the NCI and NSABP designed the STAR trial to compare tamoxifen and raloxifene. The STAR trial followed 19,747 (analysis based on 19,471 with complete information) healthy postmenopausal women (mean age 58.5 years) for only five years. It did not include a placebo group, and it did not enroll premenopausal women. Tamoxifen can have life-threatening, adverse effects, especially in older women – the same population enrolled in the STAR trial. In addition, we did not know enough about how raloxifene affects the population of women eligible for the STAR trial because raloxifene had never been tested in high-risk women. It was possible that both raloxifene and tamoxifen would not decrease breast cancer risk enough for a significantly large number of women to balance the drugs’ adverse effects, but this was to be determined throughout the study.

However, in order to make decisions regarding chemoprevention therapy, women need to know the long-term effects and have an accurate risk/benefit profile of these drugs. Such a profile does not yet exist for tamoxifen and raloxifene, and will never exist unless a study is designed with adequate follow-up time, appropriate outcome measurements, and an appropriate study population.

In June 2011 at the 47th Annual Meeting of the American Society of Clinical Oncology (ASCO), researchers presented study results on an aromatase inhibitor (exemestane) for prevention of breast cancer in postmenopausal women.7 The study found a reduction in invasive breast cancer for high risk women taking exemestane compared to women taking placebo, after merely three years.

A total of 4,560 women with at least one risk factor (over 60, Gail score over 1.66, prior hyperplasia, or DCIS with mastectomy) were randomized to receive exemestane or placebo in a double-blind trial.7 After a median 35 months of follow-up, 43 invasive breast cancers were diagnosed, 11 in the exemestane group and 32 in the placebo group. There were also 10 DCIS diagnoses in the exemestane group, compared to 27 in the placebo group. Themajority of cancers in both groups were ER-positive. The annual incidence for developing breast cancer was less than 1% in both groups, but exemestane reduced the annual incidence from .55% to .19%.

The study duration was too short to know what long term risks are associated with exemestane, and whether the reduction in breast cancer holds up over time. Exemestane has not yet been approved by the FDA for reduction of breast cancer risk.

Decisions made by healthy women regarding chemoprevention therapy are significantly different than decisions made by breast cancer patients regarding treatment. Women need more information about the risks and benefits of tamoxifen, raloxifene, and exemestane. NBCC supports more research into the long-term effects of chemoprevention drugs. The following questions about tamoxifen, raloxifene, and exemestane use in women who do not have breast cancer remain unanswered:

Future studies must provide women with answers to all of these questions and should:

The makers of tamoxifen and raloxifene, and many in the medical community, are marketing both of these drugs to all women over 60 (as well as all other women who have a 1.66% risk of getting breast cancer in the next five years) for breast cancer risk reduction. NBCC believes that this enthusiastic endorsement of tamoxifen and raloxifene is irresponsible.

More needs to be known about how to cure, treat and ultimately prevent mortality from breast cancer – and this needs to be learned from clinical trials. These trials must be well designed and well conducted, and advocates must be involved in the trial design, accrual and implementation.

Help us make a significant impact on our nation's science and health care systems to #StopBreastCancer. NBCC invites you to nominate a leader in your organization to serve on our Board of Directors by August 1! nbcc.info/NBCC615CTA 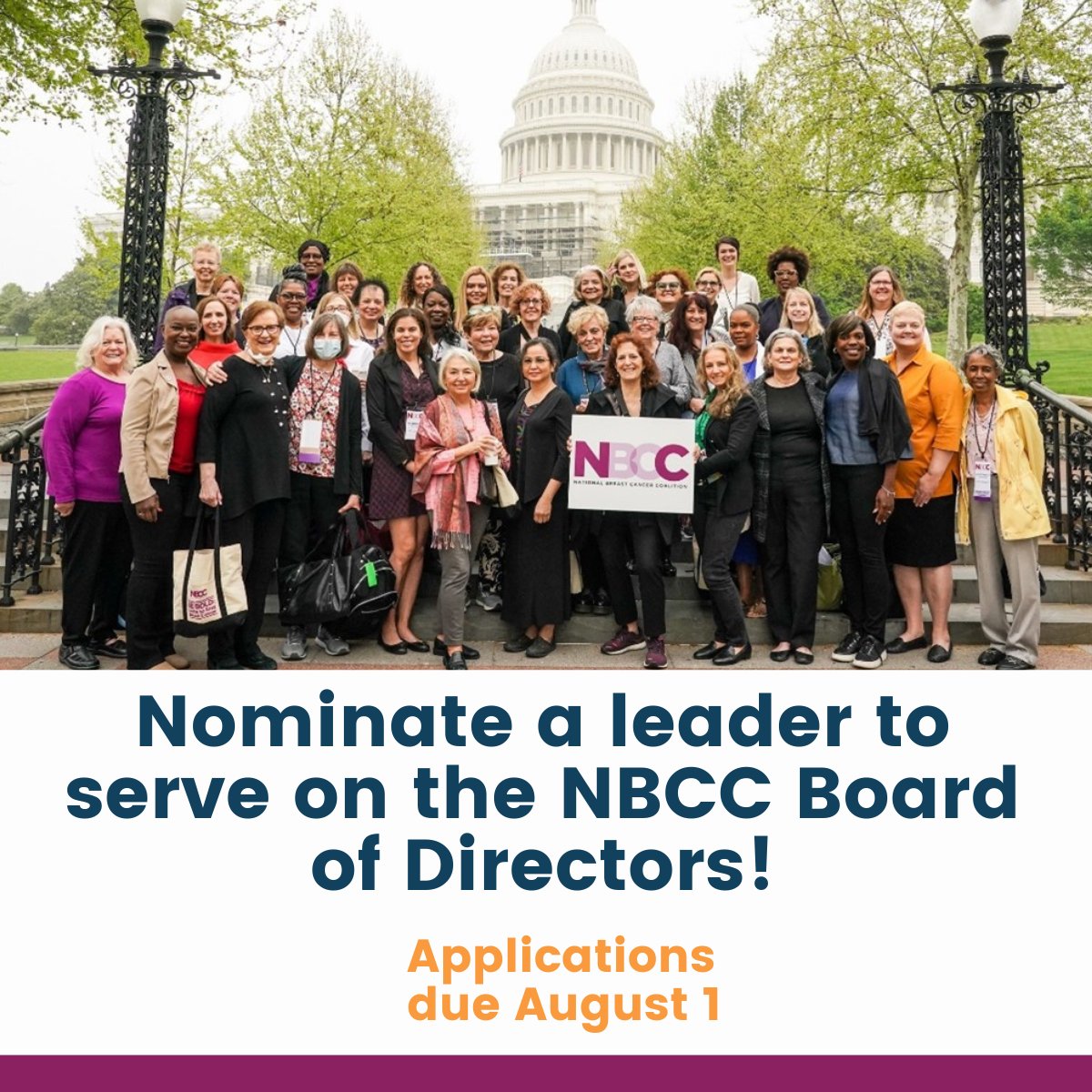